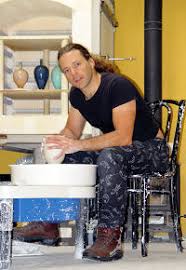 Richard Bideau pursued a career in Chemical Engineering before turning to ceramics. For Richard, crystalline glazes with their complex chemistry are irresistible.

Since 1996, starting from published recipes.  He has conducted many thousands of tests that have resulted in a unique series of glazes.

Obtaining crystals is very difficult, but with a carefully controlled glaze composition and kiln firing, a wide range of spectacular effects are possible.

Crystal formation is a little like the growth of frost on a cold window pane, only it happens in the molten glaze at a temperature of over 1000c. The crystals are composed of zinc silicate rather than water ice. The crystal shapes and colours can vary enormously.  Pale green needles, deep red flower-like blooms and blue irridescent stars are just some of the possibilities.